Ingenious: A True Story of Invention, Automotive Daring, and the Race to Revive America
(eAudiobook) 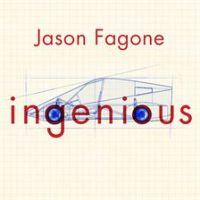