A Touch of Stardust : A Novel
(Pre-loaded Audio) 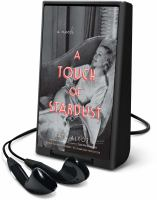 General Note
Release date supplied by publisher.
General Note
Issued on Playaway, a dedicated audio media player.
General Note
One set of earphones and one AAA battery required for listening.
Participants/Performers
Read by Cassandra Campbell.
Description
From The New York Times bestselling author of The Dressmaker, comes a blockbuster novel that takes you behind-the-scenes of the filming of Gone with the Wind, while turning the spotlight on the passionate romance between its dashing leading man, Clark Gable, and the blithe, free-spirited actress, Carole Lombard. When Julie Crawford leaves Fort Wayne, Indiana for Hollywood, she never imagines she'll cross paths with Carole Lombard, the dazzling actress from Julie's provincial Midwestern hometown. Although the young woman has dreams of becoming a screenwriter, the only job Julie's able to find is one in the studio publicity office of the notoriously demanding producer David O. Selznick--who is busy burning through directors, writers and money as he begins filming Gone with the Wind. Although tensions run high on the set, Julie finds she can step onto the back lot, take in the smell of smoky gunpowder and the soft rustle of hoop skirts, and feel the magical world ofGone with the Wind come to life. Julie's access to real-life magic comes when Carole Lombard hires her as an assistant and invites her into the glamorous world Carole shares with Clark Gable--who is about to move into movie history as the dashing Rhett Butler. Carole Lombard, happily profane and uninhibited, makes no secret of her relationship with Gable, which poses something of a problem for the studio as Gable is technically still married--and the last thing the film needs is more negative publicity. Julie is there to fend off the overly curious reporters, hoping to prevent details about the affair from slipping out. But she can barely keep up with her blonde employer, let alone control what comes out of Carole's mouth, and--as their friendship grows - soon finds she doesn't want to. Carole, both wise and funny, becomes Julie's model for breaking free of the past. In the ever-widening scope of this story, Julie is given a front-row seat to not one but two of the greatest love affairs of all time: the undeniable on-screen chemistry between Scarlett and Rhett, and off screen, the deepening love between Carole and Clark. Yet beneath the shiny façade, things in Hollywood are never quite what they seem, and Julie must learn to balance career aspirations and her own budding romance with outsized personalities and the overheated drama on set. Vivid, romantic, and filled with Old Hollywood details, A Touch of Stardust will entrance, surprise, and delight.From the Hardcover edition.
Local note
PLAYAWAY